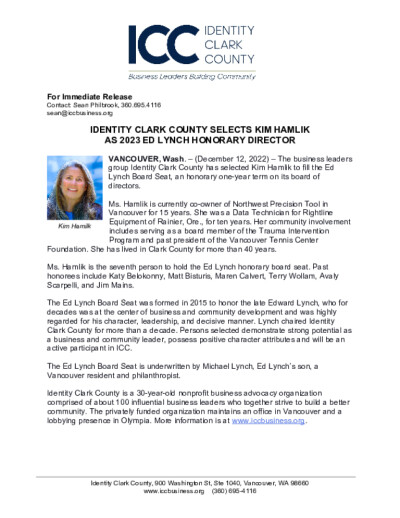 The business leaders group Identity Clark County has selected Kim Hamlik to fill the Ed Lynch Board Seat, an honorary one-year term on its board of directors.

Ms. Hamlik is currently co-owner of Northwest Precision Tool in Vancouver for 15 years. She was a Data Technician for Rightline Equipment of Rainier, Ore., for ten years. Her community involvement includes serving as a board member of the Trauma Intervention Program and past president of the Vancouver Tennis Center Foundation. She has lived in Clark County for more than 40 years. Ms. Hamlik is the seventh person to hold the Ed Lynch honorary board seat. Past honorees include Katy Belokonny, Matt Bisturis, Maren Calvert, Terry Wollam, Avaly Scarpelli, and Jim Mains.

The Ed Lynch Board Seat was formed in 2015 to honor the late Edward Lynch, who for decades was at the center of business and community development and was highly regarded for his character, leadership, and decisive manner. Lynch chaired Identity Clark County for more than a decade. Persons selected demonstrate strong potential as a business and community leader, possess positive character attributes and will be an active participant in ICC.