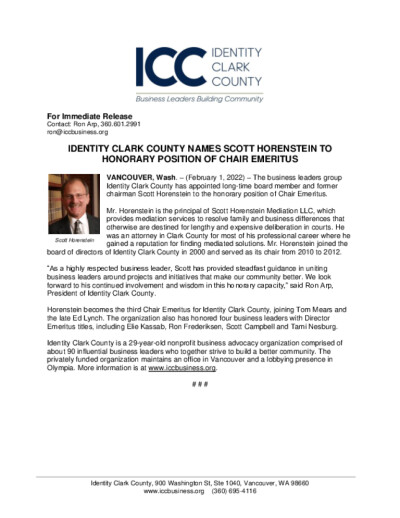 Mr. Horenstein is the principal of Scott Horenstein Mediation LLC, which provides mediation services to resolve family and business differences that otherwise are destined for lengthy and expensive deliberation in courts. He was an attorney in Clark County for most of his professional career where he gained a reputation for finding mediated solutions. Mr. Horenstein joined the board of directors of Identity Clark County in 2000 and served as its chair from 2010 to 2012.

“As a highly respected business leader, Scott has provided steadfast guidance in uniting business leaders around projects and initiatives that make our community better. We look forward to his continued involvement and wisdom in this honorary capacity,” said Ron Arp, President of Identity Clark County.