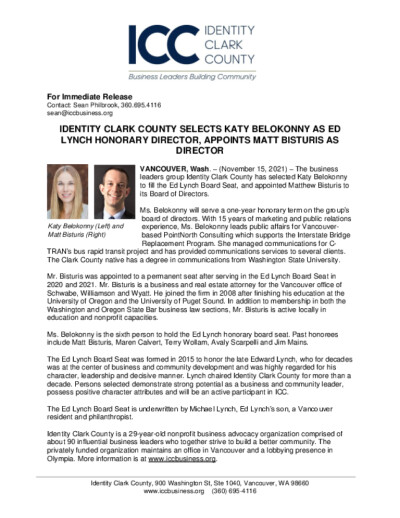 The business leaders group Identity Clark County has selected Katy Belokonny to fill the Ed Lynch Board Seat, and appointed Matthew Bisturis to its Board of Directors.

Ms. Belokonny will serve a one-year honorary term on the group’s board of directors. With 15 years of marketing and public relations experience, Ms. Belokonny leads public affairs for Vancouver-based PointNorth Consulting which supports the Interstate Bridge Replacement Program. She managed communications for C-TRAN’s bus rapid transit project and has provided communications services to several clients. The Clark County native has a degree in communications from Washington State University.

Mr. Bisturis was appointed to a permanent seat after serving in the Ed Lynch Board Seat in 2020 and 2021. Mr. Bisturis is a business and real estate attorney for the Vancouver office of Schwabe, Williamson and Wyatt. He joined the firm in 2008 after finishing his education at the University of Oregon and the University of Puget Sound. In addition to membership in both the Washington and Oregon State Bar business law sections, Mr. Bisturis is active locally in education and nonprofit capacities.