Identity Clark County Elects Patrick Ginn to its Board of Directors 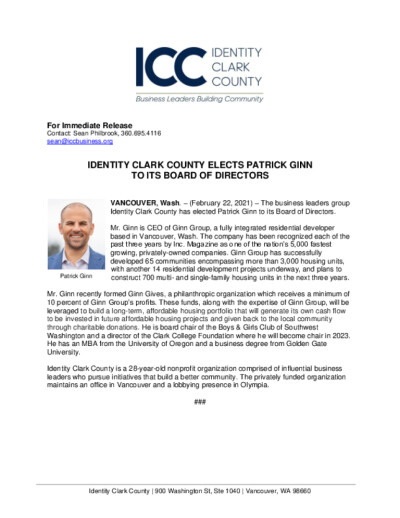 The business leaders group Identity Clark County has elected Patrick Ginn to its Board of Directors.

Mr. Ginn is CEO of Ginn Group, a fully integrated residential developer based in Vancouver, Wash. The company has been recognized each of the past three years by Inc. Magazine as one of the nation’s 5,000 fastest growing, privately-owned companies. Ginn Group has successfully developed 65 communities encompassing more than 3,000 housing units, with another 14 residential development projects underway, and plans to construct 700 multi- and single-family housing units in the next three years.

Mr. Ginn recently formed Ginn Gives, a philanthropic organization which receives a minimum of 10 percent of Ginn Group’s profits. These funds, along with the expertise of Ginn Group, will be leveraged to build a long-term, affordable housing portfolio that will generate its own cash flow to be invested in future affordable housing projects and given back to the local community through charitable donations. He is board chair of the Boys & Girls Club of Southwest Washington and a director of the Clark College Foundation where he will become chair in 2023. He has an MBA from the University of Oregon and a business degree from Golden Gate University.