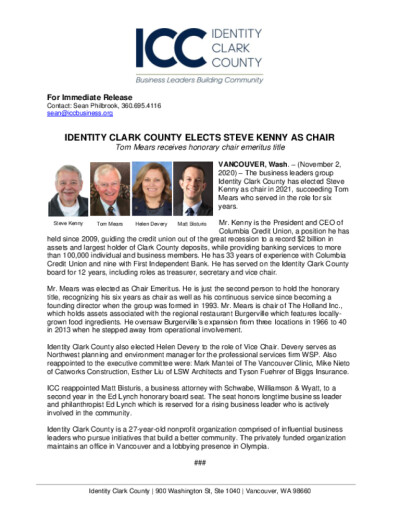 The business leaders group Identity Clark County has elected Steve Kenny as chair in 2021, succeeding Tom Mears who served in the role for six years.

Mr. Kenny is the President and CEO of Columbia Credit Union, a position he has held since 2009, guiding the credit union out of the great recession to a record $2 billion in assets and largest holder of Clark County deposits, while providing banking services to more than 100,000 individual and business members. He has 33 years of experience with Columbia Credit Union and nine with First Independent Bank. He has served on the Identity Clark County board for 12 years, including roles as treasurer, secretary and vice chair.

Mr. Mears was elected as Chair Emeritus. He is just the second person to hold the honorary title, recognizing his six years as chair as well as his continuous service since becoming a founding director when the group was formed in 1993. Mr. Mears is chair of The Holland Inc., which holds assets associated with the regional restaurant Burgerville which features locally-grown food ingredients. He oversaw Burgerville’s expansion from three locations in 1966 to 40 in 2013 when he stepped away from operational involvement.

ICC reappointed Matt Bisturis, a business attorney with Schwabe, Williamson & Wyatt, to a second year in the Ed Lynch honorary board seat. The seat honors longtime business leader and philanthropist Ed Lynch which is reserved for a rising business leader who is actively involved in the community.

Identity Clark County is a 27-year-old nonprofit organization comprised of influential business leaders who pursue initiatives that build a better community. The privately funded organization maintains an office in Vancouver and a lobbying presence in Olympia.