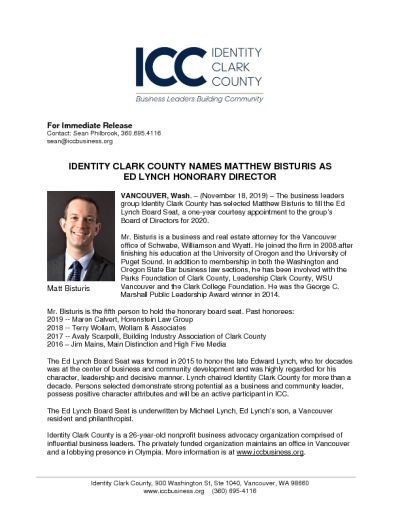 The business leaders group Identity Clark County has selected Matthew Bisturis to fill the Ed Lynch Board Seat, a one-year courtesy appointment to the group’s Board of Directors for 2020.

Mr. Bisturis is a business and real estate attorney for the Vancouver office of Schwabe, Williamson and Wyatt. He joined the firm in 2008 after finishing his education at the University of Oregon and the University of Puget Sound. In addition to membership in both the Washington and Oregon State Bar business law sections, he has been involved with the Parks Foundation of Clark County, Leadership Clark County, WSU Vancouver and the Clark College Foundation. He was the George C. Marshall Public Leadership Award winner in 2014.

Mr. Bisturis is the fifth person to hold the honorary board seat. Past honorees: