I-5 Bridge Replacement to Benefit from Expedited Regulatory Pathway 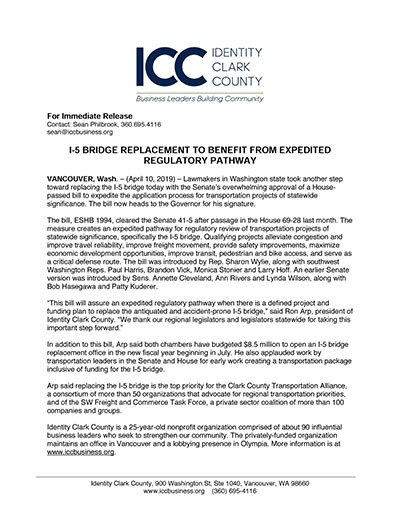 Lawmakers in Washington state took another step toward replacing the I-5 bridge today with the Senate’s overwhelming approval of a House-passed bill to expedite the application process for transportation projects of statewide significance. The bill now heads to the Governor for his signature.

“This bill will assure an expedited regulatory pathway when there is a defined project and funding plan to replace the antiquated and accident-prone I-5 bridge,” said Ron Arp, president of Identity Clark County. “We thank our regional legislators and legislators statewide for taking this important step forward.”

In addition to this bill, Arp said both chambers have budgeted $8.5 million to open an I-5 bridge replacement office in the new fiscal year beginning in July. He also applauded work by transportation leaders in the Senate and House for early work creating a transportation package inclusive of funding for the I-5 bridge.

Arp said replacing the I-5 bridge is the top priority for the Clark County Transportation Alliance, a consortium of more than 50 organizations that advocate for regional transportation priorities, and of the SW Freight and Commerce Task Force, a private sector coalition of more than 100 companies and groups.