Identity Clark County Adds Leigh Tapani to its Board of Directors 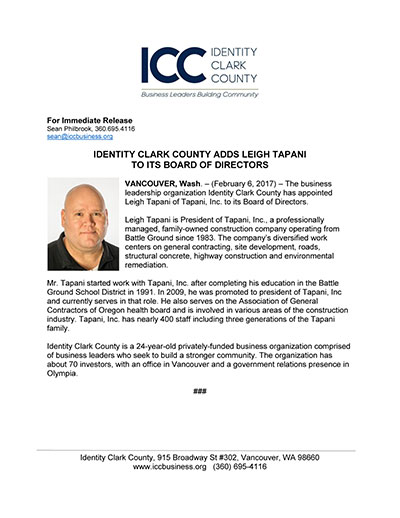 Mr. Tapani started work with Tapani, Inc. after completing his education in the Battle Ground School District in 1991. In 2009, he was promoted to president of Tapani, Inc and currently serves in that role. He also serves on the Association of General Contractors of Oregon health board and is involved in various areas of the construction industry. Tapani, Inc. has nearly 400 staff including three generations of the Tapani family.

Identity Clark County is a 24-year-old privately-funded business organization comprised of business leaders who seek to build a stronger community. The organization has about 70 investors, with an office in Vancouver and a government relations presence in Olympia.