This task should be considered an imperative for the vitality of our region, its citizens 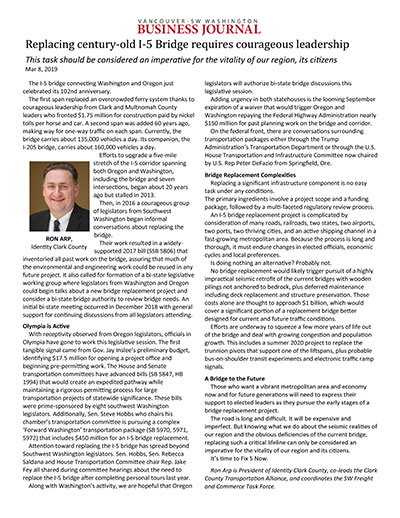 The I-5 bridge connecting Washington and Oregon just celebrated its 102nd anniversary.

The first span replaced an overcrowded ferry system thanks to courageous leadership from Clark and Multnomah County leaders who fronted $1.75 million for construction paid by nickel tolls per horse and car. A second span was added 60 years ago, making way for one-way traffic on each span. Currently, the bridge carries about 135,000 vehicles a day. Its companion, the I-205 bridge, carries about 160,000 vehicles a day.

Efforts to upgrade a five-mile stretch of the I-5 corridor spanning both Oregon and Washington, including the bridge and seven intersections, began about 20 years ago but stalled in 2013.

Then, in 2016 a courageous group of legislators from Southwest Washington began informal conversations about replacing the bridge.

Their work resulted in a widely-supported 2017 bill (SSB 5806) that inventoried all past work on the bridge, assuring that much of the environmental and engineering work could be reused in any future project. It also called for formation of a bi-state legislative working group where legislators from Washington and Oregon could begin talks about a new bridge replacement project and consider a bi-state bridge authority to review bridge needs. An initial bi-state meeting occurred in December 2018 with general support for continuing discussions from all legislators attending.

With receptivity observed from Oregon legislators, officials in Olympia have gone to work this legislative session. The first tangible signal came from Gov. Jay Inslee’s preliminary budget, identifying $17.5 million for opening a project office and beginning pre-permitting work. The House and Senate transportation committees have advanced bills (SB 5847, HB 1994) that would create an expedited pathway while maintaining a rigorous permitting process for large transportation projects of statewide significance. These bills were prime-sponsored by eight southwest Washington legislators. Additionally, Sen. Steve Hobbs who chairs his chamber’s transportation committee is pursuing a complex ‘Forward Washington’ transportation package (SB 5970, 5971, 5972) that includes $450 million for an I-5 bridge replacement.

Attention toward replacing the I-5 bridge has spread beyond Southwest Washington legislators. Sen. Hobbs, Sen. Rebecca Saldana and House Transportation Committee chair Rep. Jake Fey all shared during committee hearings about the need to replace the I-5 bridge after completing personal tours last year.

Along with Washington’s activity, we are hopeful that Oregon legislators will authorize bi-state bridge discussions this legislative session.

Adding urgency in both statehouses is the looming September expiration of a waiver that would trigger Oregon and Washington repaying the Federal Highway Administration nearly $150 million for past planning work on the bridge and corridor.

Replacing a significant infrastructure component is no easy task under any conditions.

The primary ingredients involve a project scope and a funding package, followed by a multi-faceted regulatory review process.

An I-5 bridge replacement project is complicated by consideration of many roads, railroads, two states, two airports, two ports, two thriving cities, and an active shipping channel in a fast-growing metropolitan area. Because the process is long and thorough, it must endure changes in elected officials, economic cycles and local preferences.

Is doing nothing an alternative? Probably not.

No bridge replacement would likely trigger pursuit of a highly impractical seismic retrofit of the current bridges with wooden pilings not anchored to bedrock, plus deferred maintenance including deck replacement and structure preservation. Those costs alone are thought to approach $1 billion, which would cover a significant portion of a replacement bridge better designed for current and future traffic conditions.

Efforts are underway to squeeze a few more years of life out of the bridge and deal with growing congestion and population growth. This includes a summer 2020 project to replace the trunnion pivots that support one of the liftspans, plus probable bus-on-shoulder transit experiments and electronic traffic ramp signals.

A Bridge to the Future

Those who want a vibrant metropolitan area and economy now and for future generations will need to express their support to elected leaders as they pursue the early stages of a bridge replacement project.

The road is long and difficult. It will be expensive and imperfect. But knowing what we do about the seismic realities of our region and the obvious deficiencies of the current bridge, replacing such a critical lifeline can only be considered an imperative for the vitality of our region and its citizens.