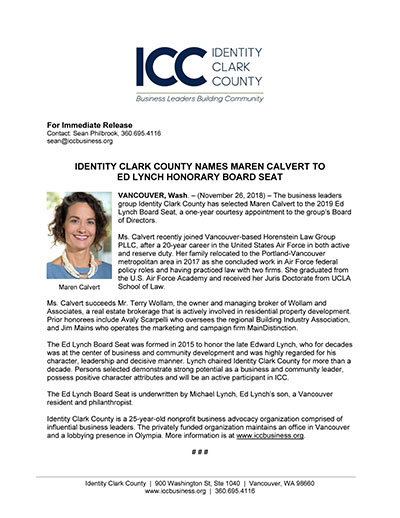 The business leaders group Identity Clark County has selected Maren Calvert to the 2019 Ed Lynch Board Seat, a one-year courtesy appointment to the group’s Board of Directors.

Ms. Calvert recently joined Vancouver-based Horenstein Law Group PLLC, after a 20-year career in the United States Air Force in both active and reserve duty. Her family relocated to the Portland-Vancouver metropolitan area in 2017 as she concluded work in Air Force federal policy roles and having practiced law with two firms. She graduated from the U.S. Air Force Academy and received her Juris Doctorate from UCLA School of Law.

Ms. Calvert succeeds Mr. Terry Wollam, the owner and managing broker of Wollam and Associates, a real estate brokerage that is actively involved in residential property development. Prior honorees include Avaly Scarpelli who oversees the regional Building Industry Association, and Jim Mains who operates the marketing and campaign firm MainDistinction.